Responsibilities of all Crew members
a. All crew members are responsible for the proper execution of his duties that:

2.Are specified in the instructions and procedures laid down in the Operations Manual.
b. All crew members shall:

3. Make use of the operator’s occurrence reporting schemes in accordance with Part A.
c. Nothing in paragraph (b) above shall oblige a crew member to report an occurrence which has already been reported by another crew member
d. A crew member shall not perform duties on an aeroplane:

5.If he knows or suspects that he is suffering from fatigue, or feels unfit to the extent that the flight may be endangered.
e. A crew member shall not: 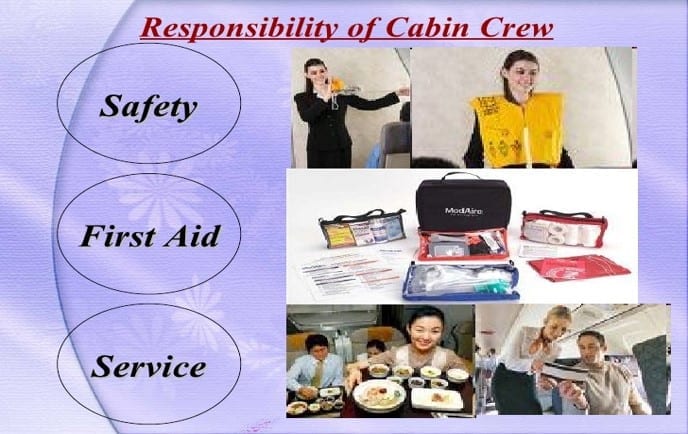 The cabin crew member shall remain medically fit to discharge the duties specified in the operation manual.

The following medical requirements are applicable to each cabin crewmember:

Duties and Responsibilities of Cabin Crew

Cabin Crew Members on airplanes fulfill several important functions they ensure, under the overall authority and responsibility of the commander: 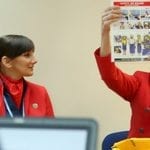 →   Direct, coordinate and organize the functions and tasks of the cabin crew,

→  Be responsible to the commander for the conduct and coordination of cabin safety and emergency procedures specified in the Operations Manual and for their observance by the cabin crew and by all passengers, and

→   Inform the flight crew of all irregularities and malfunctions and, at the prescribed times, report cabin secure or cabin not secure.

Cabin Crew Members and SCCM must meet the qualification and regency requirements.

Prior to flight, all Cabin Crew Members must participate in the commander’s cabin crew briefing, receiving information and particulars pertinent to the individual flight.

In the case where a SCCM becomes unfit for duty out of home base and no other suitably qualified (ORO.CC.200) CCM is on board, the commander will nominate the most senior and /or the most operational experienced CCM, as acting SCCM. In both cases, an extended review of all relevant safety / emergency provisions shall be made during the crew briefing.

After boarding their aeroplane, Cabin Crew Members shall check the emergency equipment, other equipment and the catering equipment and immediately report deficiencies to the SCCM for further action. For boarding of the passengers, they shall take up their prescribed positions.

In flight, they conduct the prescribed passenger services apart from fulfilling the safety relevant tasks.

In the event of an emergency situation, they proceed to their emergency stations the Senior Cabin Crew Member immediately contacts the flight crew for instructions.

At transit stations, the Cabin Crew Members ensure proper cleaning of the airplane’s cabin and ensure re-catering for the next flight.

After flight, cabin related documentation and Cabin reports shall be completed before being submit it to OCC.

Boxes / carts containing duty free items must have been sealed.

Such persons shall comply with the requirements of EU ORO.CC.100, CSPM and any other safety requirements applicable to cabin crew.

Cabin Crew Member is a crew member, other than a fight Crew Member, who performs in the interests of safety of passengers, duties assigned by Airline or the commander of the aeroplane.

Number and Composition of Cabin Crew

The minimum cabin crew permitted is in accordance with the number of passenger’s seats.

There shall be one cabin crew member for every 50 or fraction of 50 passenger seats installed in the aircraft.

Each cabin crew member must be properly trained and have passed the required proficiency checks in the knowledge and completion of the duties.

In unforeseen circumstances the required minimum number of cabin crew may be reduced below the minimum required, for example in the event of incapacitation or sickness of cabin crew member. Consideration being given to at least the following

They have to inform the company about all their commercial flying activities including the types of Aeroplane with other operators and all duty/flight times. The cabin crewmember is responsible to comply with the flight and Duty Time Limitations and Rest Requirements.

Minimum Number of Cabin Crew Required to be on Board an Aeroplane During Ground Operations with Passengers(ORO.CC.205)

Airline Operator shall ensure that, whenever any passengers are on board an aircraft, the minimum number of cabin crew required in accordance with ORO.CC.100 shall be present in the passenger compartment.

Subject to the conditions specified in (a) below, this number may be reduced:

(2)   in unforeseen circumstances if the number of passengers carried on the flight is reduced. In this case a report shall be submitted to the competent authority after completion of the flight.

(1)   procedures ensuring that an equivalent level of safety is achieved with the reduced number of cabin crew, in particular for evacuation of passengers, are established in the operations manual;

(3)   at least one cabin crew member is required for every 50, or fraction of 50, passengers present on the same deck of the aircraft;

During ground operation the following procedure shall be followed:

During ground operations, if reducing the applicable minimum required number of cabin crew, the operator should ensure that:

(1)   electrical power is available on the aircraft

(4)  cabin crew remain aware of the position of servicing and loading vehicles at and near the exits.

Additionally, in the case of passengers’ embarkation:

(6)   the pre-boarding cabin checks should have been completed.

(b)   If, in unforeseen circumstances, the number of cabin crew members is reduced below the applicable minimum required number, for example in the event of incapacitation or unavailability of cabin crew, the procedures established for this purpose in the operations manual should take into consideration at least the following:

(2)  reseating of passengers with due regard to doors/exits and other applicable limitations; and

(3)  relocation of cabin crew taking into account the factors specified in AMC1 ORO.CC.100 and any change of procedures.

Operation on More Than One Type or Variant.

For the purposes of (b) (1) above, when determining similarity of exit operation the following factors should be

assessed to justify the finding of similarity:

Self-help exits, for example Type III and Type IV exits, need not be included in this assessment.

For the purposes of (a)(2) and (b)(2),above when determining similarity of location and type of portable safety equipment the following factors should be assessed to justify the finding of similarity:

→  Other safety equipment where applicable.

For the purposes of sub-paragraph (a)(2) and (b)(3), type specific emergency procedures include, but are not limited, to the following:

When changing aeroplane type or variant during a series of flights, the cabin crew safety briefing should include a representative sample of type specific normal and emergency procedures and safety equipment applicable to the actual aeroplane type to be operated.

When the Commander becomes incapable to exercise his duty, succession will take place in the following order, subject to being current on type and within duty / rest regulations.

In any circumstances where the ranking authority of crew members is in question, the order of precedence is to be:

Airline shall take all reasonable measures to ensure that all persons carried in the aeroplane obey alllawful commands given by the commander for the purpose of securing the safety of the aeroplane and of persons or property carried therein.

The Company will nominate one of the pilots to be the aeroplane commander for each flight or series of flights.

Previous Lesson
Back to Course
Next Lesson
error:
Scroll to Top
Login
Accessing this course requires a login. Please enter your credentials below!
Lost Your Password?