RESPONSIBILITIES AND AUTHORITY OF THE COMMANDER

Private: Cabin Crew RESPONSIBILITIES AND AUTHORITY OF THE COMMANDER

Airline Operator shall take all reasonable measures to ensure that all persons carried in the aeroplane obey all lawful commands given by the commander for the purpose of securing the safety of the aeroplane and of persons or property carried therein.
The Company will nominate one of the pilots to be the aeroplane commander for each flight or series of flights.

Responsibilities of the Commander

The commander exercises the final authority in relation to the operation of the aeroplane.

1.Be responsible for the safety of all crew members, passengers and cargo on board, as soon as he arrives on board, until he leaves the aeroplane at the end of the flight.

2.Be responsible for the operation and safety of the aeroplane from the moment the aeroplane is first ready to move for the purpose of taxiing prior to take-off until the moment it finally comes to rest at the end of the flight and the engine(s) used as primary propulsion units are shutdown.

3.Have authority to give all commands he deems necessary for the purpose of securing the safety of the aeroplane and of persons or property carried therein.

4.Have authority to disembark any person, or any part of the cargo, which, in his opinion, may represent a potential hazard to the safety of the aeroplane or its occupants.

8.Ensure that all operational procedures and check lists are complied with in accordance with the Operations Manual.

9.Not permit any crew member to perform any activity during take-off, initial climb, final approach and landing except those duties required for the safe operation of the airplane.

10.Ensure that the pre-flight inspection has been carried out.

The commander shall ensure that:

The commander obtain and check all available aeronautical and meteorological information pertinent to his next flight including NOTAMs, SNOWTAMs, runway and conditions, temperature / pressure reports, and upper wind and aerodrome meteorological forecasts.

This information will enable the commander

He conducts a crew briefing, relating information and particulars pertinent to the individual flight.

He ensures that the prescribed pre-flight checks and inspections have been or are being carried out, and decides whether to accept or not to accept the aeroplane with unserviceable items allowed by the CDL or MEL.

When preparing the flight, he shall, by examining the available documents and maintenance releases of authorized personnel, determine and certify by signing the appropriate documents that:

1.The aeroplane is airworthy

2.The aeroplane configuration is in accordance with the CDL

3.The instruments and equipment required for the flight to be conducted are available

4.The instruments and equipment are in operable condition except as provided in the MEL

5.Those parts of the operations manual which are required for the conduct of the flight are available

6.The documents, additional information and forms required to be available are on board

8.Ground facilities and services required for the planned flight are available and adequate

9.The provisions specified in the operations manual in respect of fuel, oil and oxygen requirements, minimum safe altitudes, aerodrome operating minima and availability of alternate aerodromes, where required, are complied with for the planned flight

10.The load is properly distributed and safely secured

11.The mass of the aeroplane, at the commencement of taxiing and takeoff roll, will be such that the flight can be conducted in compliance with the OM Part B

Prior to taxiing, he must ensure that:

In flight, the commander continues to supervise, direct and coordinate the tasks / work of his entire crew so as to obtain a maximum of good airmanship for the conduct of the flight. 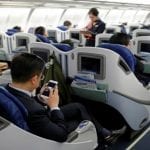 After flight, the commander ensures that the Flight and Aeroplane Technical Reports are completed.

He prohibits erasure of data recorded on a flight data recorder and a cockpit voice recorder in the event of an accident or incident having occurred which may be subject to mandatory reporting.

He hands over the aeroplane to the next crew or to the maintenance personnel, or parks, locks or seals and secures the aeroplane properly.

At aerodromes without handling personnel under contract to the company (e.g. after a diversionary landing) it is the commander’s responsibility to ensure that all passengers, the airplane’s load (e.g. live animals) and the aeroplane are well taken care of. He must also ensure the security of the aeroplane.

He files written occurrence reports as prescribed in OM part A Section 11, communicating also by telephone or facsimile if necessitated by the urgency of the matter.

He directs the attention of appropriate personnel to technical and operational particulars and problems encountered.

Therefore, it is his duty to responsibly participate in the preparation of the flight and to attentively monitor its progress in order to be able to assume this authority/responsibility at any given moment.

He cooperates, in a responsible manner, as a member of the airplane’s crew, and meticulously performs the work routinely assigned to him or delegated to him by the commander. It is his duty to:

Report to the commander any fau